Swift is a no-nonsense twitter app giving you almost everything a true avid “tweeter” needs without the useless features this giving you more for your data.

It has no pro version, unlike most apps of this nature its full version is free.

– No Advertising
– No Limits

The main things it can do is

What this does is lets you know when your about to pass character length needed for others to ReTweet your tweet a great feature for people who like others Retweeting their tweets like myself.

Now as I’ve found NO twitter app has everything I would want and probably others want too this one lacks a few key features to get it perfect but its good in its current state and the developer who I talk to a fair bit is a smart guy and listens to everyone who has decent requests for improvement of his app.

– Reliable Notifications
– UI Clean
– Basic Options Available Anywhere (e.g you Can ReTweet/Reply when viewing others profiles something Twidroid lacks)
– ReTweetability Counter
– All BASIC Features
– Easy To Use
– Less Data Usage than competitions (Tested A Hours Use On Both This, ITweet And Twidroid and using 3GWatchDog Found This Used Less Data In That Hour Of Use Refreshing Every tweet/5mins)

This is good for a less data usage, no-nonsense app its missing those key features that would make it great but overall a great app for users who use twitter often for communication with other twitter users. 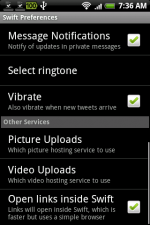